The store will not work correctly in the case when cookies are disabled.
chevron_left

Don’t underestimate the importance of choosing the right bathroom taps to suit your needs and your space. Bathroom sink taps can make an enormous difference to the aesthetic of your space, so whether you choose a contemporary bathroom mixer tap or more traditional taps for bathroom sinks, you can create the ideal style to suit your room.  When you browse our selection of bathroom basin taps you’re sure to find something that suits your tastes, budget, and preferences. With an extensive selection of bathroom tap colors, materials, and designs to select from, we’re confident that we can help you find the bathroom sink tap that complements your room design and décor.

No doubt when you’re renovating your bathroom, ensuite, or cloakroom, your first thoughts will be to choose the fixtures such as your toilet, bath, shower, and basin. But once you’ve made these essential selections, it’s important not to overlook the other key elements of your room.

Although taps may seem to be a small component in the wider scale of a bathroom renovation, making the right choice is essential if you want to really make the most of your space and create the look and aesthetic that you desire. With the wrong taps, you could find that your space lacks the sophistication and elegance that you were hoping to achieve.

If you’re choosing new bathroom taps, there are many things to keep in mind. In fact selecting new taps for your bath or basin isn’t as easy as you might imagined. Not only do you need to choose taps with the correct number of holes, but also ones that match your chosen fixtures, fittings, and décor. With this in mind, we’ve created this ultimate buying guide for bath taps, bidet taps, and basin taps so you can be well-informed when making your purchase.

The different types of bathroom tap

First things first – the different kinds of bathroom tap that you’ll find on the market. There are three main types of bathroom taps that you’ll need to select for your renovated space. Each one of the three types comes in different styles and formats. You may need to choose some or all of the following:

As you can imagine, virtually every bathroom will require basin taps, although bath taps will not be necessary in bathrooms that only have a shower. Bidet taps are required far less often, but with more UK homes adopting this European trend, bidet taps are rapidly becoming essential for more bathrooms up and down the country.

If you only require basin taps, you have a free choice of styles to complement or even contrast with your décor and fixtures. However, if you need to find taps for multiple fixtures in one room, you’ll probably want a cohesive look. It’s therefore important to choose taps that match across the range so that you won’t end up with an uncoordinated and mismatched bathroom.

One of your first considerations when choosing basin taps is the number of holes. You may not have realised that taps come with multiple hole configuration options, but in fact you have three different configurations to pick from.

There are 1, 2 and 3 hole tap options, and you must choose the correct style to go with the number of holes in your selected basin. The most common number of holes for basin taps is the 1 hole design, which allows for mixer taps, but a three hole design is more common if you’re choosing a traditional style basin.

Make sure you check the number of holes in your basin before you choose the right taps for you as you could find that you’ve set your heart on a style that isn’t compatible with your chosen fixture.

When it comes to bath taps, most baths are typically supplied without the holes having been drilled in position, so you usually have more freedom of choice about whether to opt for a one, two, or three hole tap configuration.

The one exception to this is steel baths as they come with the holes already in position when you purchase them, leaving you with no flexibility in the configuration you opt for. However, the most popular bath tap choice is the two hole design which allows for a bath filler and a bath shower mixer.

Both bath and basin taps come in a choice of finishes that can complement the rest of your bathroom décor and the other fittings that you’ve selected. The most popular finish is chrome thanks to its stylish good-looks, its low maintenance, and its ability to work well with both contemporary and classic-themed bathrooms.

Brushed brass taps are rapidly rising in popularity too thanks to their luxurious appearance. They work particularly well with freestanding baths and those with a Victorian or Edwardian look. Another popular choice is the matt black bathroom tap.

This unusual finish allows you to create a very modern and designer look for your space. There are other finishes to choose from too, including brushed nickel and regular nickel, gold, or gun metal. It’s worth noting, though, that although these more unusual tap finishes are visually appealing, they will usually cost more than standard chrome taps, and they will typically be harder to care for.

Keeping brass or matt black taps looking as good as new in the long term can be very challenging, and you’ll need to be prepared to put more time and effort into your bathroom cleaning regime if you’re to keep them looking in top condition at all times.

When you’re choosing bath or basin taps for your home, you must consider the material that they are made of as well as their finish. The two options that you’ll find on the market to choose from are brass and ABS taps. Only brass taps are really suitable for long term use in any bathroom. ABS taps are made from plastic and are prone to damage.

When you’re selecting bathroom taps, a further consideration to keep in mind is where they will be mounted. This is a factor that often gets overlooked, and many homeowners are unaware that there is more than one different option when it comes to where to place your taps. In fact, in the case of bath, basin, or even bidet taps, you have three options to select from:

What is a mixer tap?

Traditionally, baths and basins came with two separate taps, one for hot water and one for cold. These days, though, mixer taps are rapidly becoming a more popular choice. A mixer tap is a single outlet which has a valve inside that mixes the hot and cold water together. A single handle controls the water flow into the bath or basin.

Whats the difference between a mixer tap and a filler tap?

Filler taps and mixer taps are similar in function, but their design is slightly different. Essentially, a mixer tap and a filler tap both have a single water outlet, but while a mixer tap has an internal valve that mixes the hot and cold water together to produce a water stream of the desired temperature, a filler tap allows you to adjust the water mixture manually.

Instead of a single handle as you would find on a mixer tap, a filler tap comes with two separate taps attached to the single water outlet, one for hot water and one for cold. You can adjust for yourself how much hot or cold water comes out of the spout by physically turning the handles rather than relying on a valve.

What is a thermostatic mixer tap?

Should this occur, the valve cuts off to ensure the safety of the person who is using the basin or bath. Another benefit of a thermostatic mixer tap is that if somebody turns on the hot water in another room of the home, the thermostatic tap compensates for this and maintains the same temperature throughout. That prevents the all-too-common problem of a blast of icy cold water partway through washing due to someone downstairs using the kitchen tap!

What else do I need to consider?

There are a few more considerations to bear in mind before you make your final selection of the perfect bath, bidet, or basin taps for you.

Firstly, you should consider the other tap styles and features that are available. Waterfall taps are becoming more popular and they can add a lot of extra style to your bathroom, whether you’re opting for a traditional or contemporary look for your home.

There are plenty of both modern and classic tap styles to select from these days, so make sure you take your time to select ones that complement your chosen bathroom aesthetic as well as the rest of your fixtures and fittings, and décor.

One final thing to bear in mind is the finish you’ve selected for your taps. While brushed brass and matt black taps look fantastic, it’s worth remembering that they’re harder to care for and maintenance requirements can be fairly onerous. You will have to put in the cleaning effort regularly to keep them looking as good as new in the long term.

If you want a lower maintenance option, choosing standard chrome is a lot simpler as chrome taps are quick and easy to keep clean.

Now that you’re well-equipped with all of the essentials to consider when choosing the right taps for your fixtures in your renovated bathroom, ensuite, or cloakroom, it’s time to take a look at our range and find the perfect taps to suit. Whether you’re seeking a designer, contemporary look, or whether you’d love to achieve a touch of period glamour in your space, you’re sure to find just what you’re looking for. 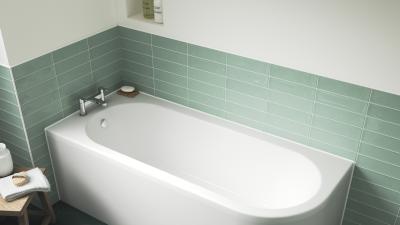 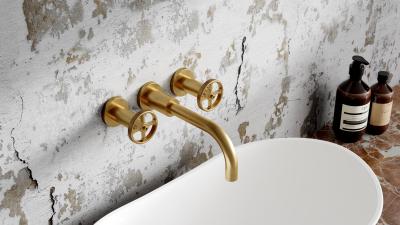